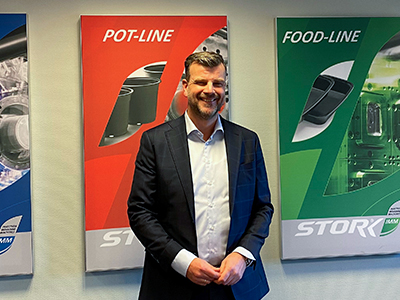 As of February 1, 2022, Stork IMM will welcome Gert Boers as its new CEO.
Gert takes over from Martin Essink, who fulfilled the role of CEO of Stork IMM during 2021. Martin had been involved with the company for several years as previous owner, Wadinko, investment manager. As a result of the transfer of shares to Stibbe Participaties, he stepped down as CEO on 31 January 2022.
Martin looks back on his role as CEO at Stork IMM with a good feeling:
“As Stork IMM we have had turbulent years in which we have succeeded in taking the right steps forward. It would take too long to review them all again, but what remains most important to me is the drive and the positive Stork feeling among the employees. They have been able to bring Stork IMM closer to the customers again and make improvements in their way of working. This puts the company in a healthy starting position and we notice that every day. New challenges are emerging, such as issues in the supply chain and an even sharper focus on the markets in which we are distinctive. We talk about the product and the customer on a daily basis again and I experience the inspiration of the people who work in Hengelo and that is a great feeling to take away with you.”
Gert Boers has been closely involved with Stork IMM for several weeks in preparation for his new role as CEO of Stork IMM.
Gert has worked for various international companies in the region, including Power-Packer and TenCate Grass. He therefore has a lot of experience as a CEO of international companies involved in the manufacturing industry. Before starting at Stork IMM, Gert worked for Howden Hengelo, which, like Stork IMM, is a former Stork company.
Gert is very much looking forward to the challenge presented by Stork IMM. “We are looking to the future and want to work with our employees, customers, and suppliers on further growth of this great company with healthy results.”
Stibbe Participaties looks back very positively on a careful transfer from Wadinko and on the supporting role it has played in recent years and is very satisfied with how Stork IMM has closed the year. “The 2021 results provide a sound basis for further growth.”