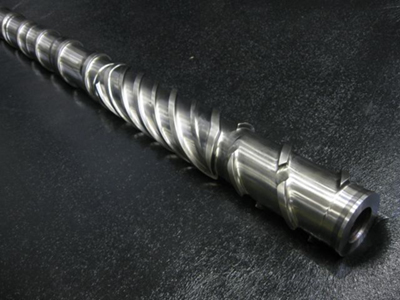 Customers choose their machine partly on the basis of information on the manufacturer's machine leaflets. The customer must therefore be able to rely 100% on the correctness of that data.

The screw output indicates how much plastic a screw can melt within a certain time. The manufacturer should indicate the screw output in grams per second (gr / sec) and in kilograms per hour (kg / hr). There is still sometimes a lack of clarity about the relationship between these values. It seems logical that the output in kg / hr is simply the output in gr / sec, multiplied by 3,600 and divided by 1,000. For a screw in an extruder this is true, but the geometry of a screw in an injection molding machine is different.

Screws of most injection molding machines (with the exception of shooting pot) cannot rotate continuously to melt plastic and as such they cannot provide enough heat for that to occur. At some point unmelted material would flow through; the so-called “windows” that you can see in a product if you hold it up to the light. On average, a screw from an injection molding machine for the packaging industry will stand still for about 30-40% of the cycle time.

The output of the screw in grams per second is generally dependent on the geometry, with coloring and output often being each other's enemies. The easier the plastic passes through the screw, the higher the output. On the other hand, more resistance results in better mixing / coloring, which also saves masterbatch. The high-performance screws from Stork IMM offer the best ratio between output and coloration. The output in grams per second is given at a certain screw speed. Up to a certain speed, the output of the screw in gr / sec is directly proportional to the speed.

For the output in kg / hr, the l / d ratio, i.e. the length of the screw in relation to the diameter, also plays a major role. The higher the l / d ratio, the higher the output, as the plastic takes longer and melts better. For a good comparison find out whether the manufacturer measures the length of the screw according to Euromap from the front of the hopper filler opening and not from the first screw turn. As a result, the l / d ratio appears to be greater than that according to Euromap and is incorrect in comparison with other manufacturers.

If you would like more information, please call our general number or ask your sales manager about our latest offers.